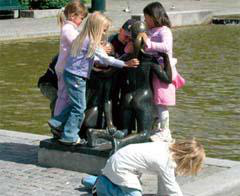 The Welfare Society and Social Policies group studies social welfare, welfare for the elderly and people with disabilities, and civic activities. We focus on the societies where the elderly and people with disabilities can live independently. We use comparisons with Scandinavian countries such as Sweden and Norway as well as other countries to identify problems in present-day society and debate potential solutions. In addition, by framing social welfare as a civic project aimed at the creation of a “better life”, we consider that desirable forms of social welfare such as healthcare and pensions contribute to that goal.