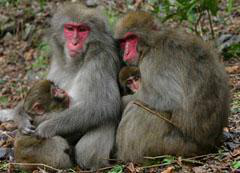 Research Topics
■ Ethological research on the behavioral development and social cognition of primates
■ The examination of the factors that influence individual differences in primate behavior and the impact of individual differences on primate social structure
■ The behavioral science of zoos: behavior of display animals at zoos, behavior and interests of zoo visitors, and animal-human interaction
Ethology is a research field in which we record the details of animal behaviors in various environmental conditions and examine the ways in which each behavior plays a part in the survival of the animal and the ways in which that behavior has evolved. We accurately record the morphology, behaviors, and cognitions of creatures and objectively analyze obtained data to reveal the “wonders of behavior.”
Main subjects of observation are “wild Japanese macaque living in groups” and “wild animals living at zoos.” By focusing on and observing behaviors such as child rearing, child growth and development, the mother-child relationship, playmates, blood relations, hierarchy, fighting, mending, and aging. We sometimes use biological indexes such as genes and hormones that attempt to reveal the way that animals live.
Primates including humans are neighbors in the framework of evolution. We could learn so much about humans by understanding the ways of life of primates, our evolutionary neighbors, and a little more distant non-primate mammals. Recently, we have conducted research on animal-human interaction through cases on, for instance, the interactions between zoo visitors and display animals.