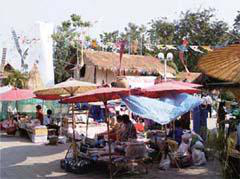 Anthropology is a field of study that seeks to comprehensively understand the state of human society and culture through field research. The four faculty members have conducted field research for a long period of time in their respective sites including Southeast Asia, Africa, North Asia, and Japan. In addition, the graduate students who are affiliated with this research area are also conducting research work in various parts of the world including Japan.

Faculty members of the research field of anthropology conduct the following research:

Note that the research track in Anthropology works with the “Science, Technology and Culture” in research and education. Our track also played a central role in the Global COE Program “A Global Research Hub for Conflict Studies in the Humanities,” which was implemented in the Academic Years 2007 through 2011 and has subsequently been making use of the project’s output in research and education.