Conducting statistical analyses of behaviors by describing them through formulas 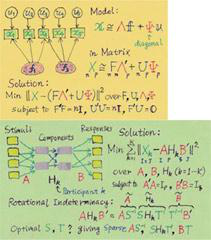 Research Topics
■ Psychometrics, multivariate analysis, behavioral statistics, and mathematical psychology
Psychometrics, among other terms, is used to describe a research field in which statistical techniques are studied and developed to analyze psychological and behavioral data. Some of the analytical techniques collectively called multivariate analysis methods originated in this field. Primary examples are factor analysis, structural equation modeling, multidimensional scaling, and various principal component analysis techniques. Research topics include the improvement of these analysis methods and the development of new methods, that is, the invention of statistical mathematical models and the development of algorithms to solve them. Although people often think that mathematics-related ideas “have already been established,” this is not an accurate description. There are many research topics to pursue because existing statistical methods can still be improved significantly and there are many undeveloped methods that researchers wish they had. In addition, our research area also encompasses an academic discipline that might appear to replace “matter” in “physics” with “mind”— that is, mathematical psychology, which attempts to mathematically describe mechanisms such as cognition, memory, thought, and emotion. It is true that these research areas require mathematics such as linear algebra and probability theory; however, what is actually more important than your mathematics is an unfettered imagination and fresh creativity.